Brendan does not like flying! I can talk about myself in the third person here because on an aeroplane I become someone unrecognisable to myself. It is a rather unfortunate aspect of an otherwise great job. Some like it; I hate it! I don’t know what it is. I have tried everything; getting blind drunk, getting blind drunk, getting blind drunk! All to no avail. What is so fearsome about taking off and landing, I just don’t know. I feel like Mr. T. off the A-team. Perhaps I need tranquilising with an elephant gun or something. Well, anyway, I wouldn’t go anywhere nice if I didn’t get on the damned things. I didn’t get on a plane until well into my twenties, just after a decade or so of high profile disaster movies involving aeroplanes. And yes, I do enjoy that spoof movie ‘Airplane’. These days I have developed a kind of self-hypnosis, whereby I can put myself to sleep before take off and landing, but end up very groggy for a while afterwards; without the need to resort to gallons of alcohol. My happiest time at John Lennon Airport was when I didn’t have to board a plane at all. They renamed Liverpool Airport John Lennon Airport and at the ceremony, Yoko Ono insisted that if the press were to have her picture she was going to have it taken with the Brass Section of the RLPO.

So here we are, in San Sebastian. The coaches picked us up in Biarritz as it turned dark and dropped us at the hotel Amara Plaza here in the city centre. The first thing I did was run the hot bath I had been promising myself all week. Ah, luxury! What a pleasure, a week after my boiler in the Liverpool Georgian Quarter was condemned. I must admit to pouring in tons of the complimentary bath oils etc and pampering myself for ages.

I decided to go for a wander by myself to see what was happening. I have yet to see what San Sebastian looks like by day but if it compares at all to it’s night appearance this must be a truly beautiful city. We are staying alonside the River Urumea. I began my walk along the river and headed north Past the beautiful Marie Christina Bridge veering off towards the Cathedral Buen Pastor. The Cathedral Square is indeed as stunning as I had been told and I stood for a while and marvelled at it’s magnificent steeple. 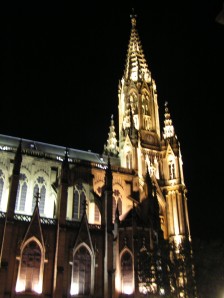 Walking on further into the Vieille Ville, or Old Town I stumbled upon the celebrations for the the Semana Grande, or Big Week. The whole city seemed to be out running amok at this end of town. It was already way past midnight but thousands of people were streaming into the little streets watching acrobats, comedians, rock bands folk groups; one square seemed to be dedicated to hundreds of people doing waltzes. The cider bars were overflowing. Feeling a little peckish I entered one of the many traditional Pintxos establishments. Pintxos is two small pieces of bread held together by a skewer or cocktail stick and a seemingly infinite variety of fillings is available. I was instructed to get a plate, pile on whatever I wanted, show it to the bar steward and then eat to my heart’s content. traditional sausage, fish, omelette, sea food, jamon etc. It would seem to be traditional to wash this down with the local cider.

I continued northwards as I wanted to see the famous fortress on the point by night. Sadly, all access was closed but there is always tomorrow. Instead, I got to gaze in wonder at the beautiful Eglise Santa Maria. The Architecture is very beautiful in this town. The scultures on this church are remarkable, even at night. 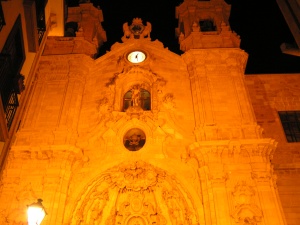 I wandered up and down the little streets enjoying the ambience of a whole town out on the streets having a great time. All ages were contributing. It is refreshing to see so many families and kids celebrating in a culture that seems confident and safe. I treted myself to a very large mint chock chip ice cream and wandered back after gazing at the sea for a while. Passing the Cathedral again I came across the brass section relaxing outside one of the many alfresco bars. 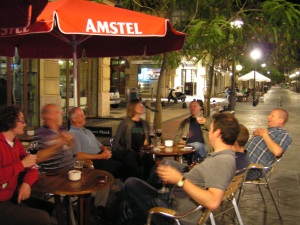 I walked back alongside the river back to the hotel. It’s very quiet around here at this time of night. Walking along the river is a nice way to unwind last thing at night. The concierge informed me that bicycle hire is only five euros per day. So that is tomorrow’s transport problem sorted out. I poked my head into the hotel bar to find most of the RLPO relaxing with a few drinks.

I would like to mention a very good friend of mine back in Liverpool. Mireia Llach i Mar has given me an invaluable insight into the culture of this region, it’s food, artwork and music. She has also asked me to remind everyone that Everton FC’s very own Mikel Arteta was born in San Sebastian. Anyway, it’s almost four in the morning here so I’m going to do about twenty minutes trumpet practice, then bed. More tomorrow!

The Phil on Tour