It has been quite a while since I have blogged at all. I have moved house, had no internet for ages, have become involved in a new, wonderful relationship with someone special and a thousand other excuses. However, I have been under pressure from all quarters to do so. I didn’t blog during our China tour because of the appalling censorship and quality of internet there and someone complained, “…The official blog is very tedious. What has happened to Brendan Ball’s blog?” I suppose they must like a different way of looking at things.So I thought I’d better ‘shape’ meself. Blogging is a funny thing; an all consuming passion when one goes at it or a chore when one has left it alone for a time and other endeavours have taken it’s place! Personally, I have found no middle way. I have been doing up a fairly large house for the last few months and wanted to get my study etc up and running before I threw myself back into writing. I have largely completed the works to our home now and feel a renewed enthusiasm growing for my largely neglected web site.

This will not be like blogs I have done on previous RLPO tours. This is a real ‘whistle-stop’ affair and I will be afforded no time for the luxury of discovery and tourist ventures of previous forays. Seven cities in seven days, in three different countries. There will be no time to make my hotel room untidy! I like to refer to these kind of trips as ‘commando raids’ – straight in and out! I like to plan for good sleep, food and a little exercise. Maybe this is a sign of me ageing but if I’m not careful these days, I find myself getting run down very quickly on tour and that takes the shine off the occasion for me. On the other hand, during the chaos these occasions throw at you, there is a tendency to be thrown together with people you normally wouldn’t have opportunity to speak to so much. The RLPO has made a number of new appointments to it’s membership of late and I will try and introduce as many of these as I can throughout the tour. I will also endeavour to capture a little of what I find in each place but time is scarce. I’m armed only with my iPhone camera on this trip also, so the photos will be of varying quality.

RLPO 'bones getting their elbows going

The RLPO will be playing a set programme for each concert.

The Wasps is incidental music composed by the British composer Ralph Vaughan Williams in 1909. It was written for a production of Aristophanes’ The Wasps at Trinity College Cambridge. Vaughan Williams later arranged parts of the music into an orchestral suite, in five parts:

The Overture is quite concise (about 9 minutes) and is a popular independent concert piece today. The Wasps is quintessential Vaughan Williams and except for the opening buzzing and ending, the piece has little to do with wasps or with ancient Greece.

Mozart Piano Concerto no. 23 in A. This beautiful piece needs no introduction as it is so familiar in the concert hall. It is very exciting for us to have it played by the legendary Hélène Grimaud, especially as it is to be performed on our opening night in Aix-en-Provence, Helene’s home town.  Grimaud was born in Aix-en Provence in the south of France in 1969. She studied with Jacqueline Courtin at the conservatory there and subsequently in Marseille with Pierre Barbizet. At the age of 13 she was accepted by the Paris Conservatory where she won the first prize in piano in 1985.  Hélène Grimaud has since performed with many of the world’s major orchestras and renowned conductors.

Manfred Symphony in B minor is a programmatic symphony composed by Tchaikovsky between May and September 1885. It is based on the dramatic poem written in 1816-1817 by Lord Byron.  The poem contains supernatural elements and the hero is a superman, Manfred. This literature inspired many composers; Schumann; Nietsche and not least Tchaikovsky. It is the only one of Tchaikovsky’s symphonies he completed that is not numbered and was written between the Fourth and Fifth Symphonies. He initially considered the work one of his best, and in a typical reversal of opinion later considered destroying all but the opening movement.  Manfred remained rarely performed for many years, probably due to its length and complexity. It has been recorded from time to time but is still seldom heard in the concert hall.

The RLPO has gone a long way to resurrecting Manfred Symphony, under Vasily Petrenko. We have released an award winning album of the piece, have given a tremendously successful BBC Proms concert last summer, successful performances in Liverpool and now a seven day tour of Europe. All concerts are sold out prior to the tour commencing and we are all looking forward to good receptions. Manfred is epic both in the length of the work and the size of the orchestra. Petrenko certainly has a sure feel for this Russian repertoire, as his critical acclaim with the RLPO testifies.

Rehearsals for the tour. We had already had two whole days’ rehearsal for the tour- Mon 21st and Tuesday 22nd. helen Grimaud appearing with us on Tues afternoon. The RLPO lorry [known as ‘the van’] was to set off overland immediately after the Tuesday rehearsal to be in Aix-en-Provence on Friday 25th; in time for our flight arrival in Marseille and coach trip to Aix.

RLPO Lorry about to depart for France

The van: I always give our boys on ‘the van’ a mention. Without them getting all the instruments, music, stands, flight cases, lighting, wardrobes and setting all the platforms ready in time, we wouldn’t be able to go anywhere. Our platform managers are Ian Doran and Alan Scollins. They have many years service for the RLPO between them and in my opinion are the best in the business. Nothing is too much trouble for them… ever. This trip they will be supplemented by two other drivers, Ed & Neal, to cover the lengthy distance and hours on the road. It goes almost without saying that their trip will be about six days longer than ours. Also, after driving to venues their job begins two hours before we arrive and and they only get to drive on two hours after we finish. Unsung heroes!

The Trip Out: Most of the RLPO were set to enjoy two days off before the flight to Marseille on Friday 25th March. I had decided to squeeze in a Haydn Mass for Philip Duffy on the Wednesday and a trumpet and organ recital with Ian Tracey at the Bluecoat School in Liverpool on the Thursday. Having Thursday evening free, I was able to drop Scooby off at the Dog Whisperer’s and pack my things in a more leisurely way than usual. The coach picked us all up at Philharmonic Hall at 8.00am on Friday to drop us at John Lennon Airport. A slight delay occurred as we stopped to pick up tour manager Sandra Parr who was waiting by the wreckage of her BMW by the roadside on the way. The whole RLPO boarded the charter flight to Marseille without further ado and arrived about three hours later.

Marseille/Aix-En-Provence: The coach to the hotel passed the Arc de Triomphe  and some of the ancient city walls before dropping us off briefly to unload our clothes. The concert was in Aix, but the stay in Marseille was necessary for the following day’s rail journey to Paris.

We arrived shortly in Aix. The new concert hall has wonderful facilities and is very interesting architecturally. The rehearsal began with tuning up the organ to match the orchestral pitch. It was way too sharp for us, but the situation was rectified after some remedial work.

During the break, I decided to have a limited wander around this beautiful city. It was a beautiful day with sun blazing down. I had always wanted to go to Aix and had been jealous of colleagues telling me about the scenery, wine, food, weather etc. Well, I couldn’t achieve a lot in an hour and a half but I could try to find some real local food. I went off the commercial roads, down a few back streets and found just what I was looking for, a ‘local’ restaurant that was just opening. I explained my predicament and the waitress said I could have something special as long as I was quick; the restaurant was fully booked for later. We had trouble communicating, but the situation eased  on the arrival of two nuns who spoke perfect English. I think the food was as nice as I have ever eaten. The restaurant was called ‘Le Petit Verdot’. The first course was a clear soup called ‘Barigoule D’Artichau’ and consisted of artichoke hearsts on a bed of vegetables, including celery, carots and leeks; all drizzled in lemon juice. The main course, ‘Gigotin D’Agneau’ was the house speciality of ten hour braised lamb in garlic and thyme. This was accompanied by a bed of vegetables on cabbage and topped with mustard cress. The novelty for me was the mound of unsweetened rice pudding in the centre. A fantastic find. I’d recommend the place to anybody. http://www.lepetitverdot.fr 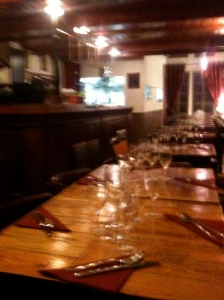 Back at the hall the concert was received with rapturous applause. Prior to the trip, it had been considered unnecessary to bring an encore due to the epic nature of Manfred. It was considered very intense and draining for both musicians and audience alike; but, at the end, the audience in Aix were stamping their feet in unison, demanding more. It was unfortunate that we had nothing further to offer! It was decided to have the Russian Dance, or Trepak [from The Nutcracker], sent over for the rest of the trip.

Fountain outside the Hall in Aix

Back in Marseille I Skyped home, downloaded my emails etc  then decided to go for a walk around. The hotel was situated just next to the excavation of the old harbour ruins and very close to the modern day port with it’s marinas of luxury yachts and late night bars. This is a very colourful place at night and I would have to say that there is something for everyone if you don’t mind the noisy nightlife; it’s a lot of fun!