Posted on November 9, 2012 by brendanball

Last week saw me take my place in Ensemble 10.10, the Royal Liverpool Philharmonic Society’s contemporary music ensemble. This was the opening concert of our new, busy season. We were playing in our latest regular venue, the newly refurbished and renamed Epstein Theatre on Hanover Street. This city centre venue was formerly known as the Neptune Theatre but has risen like The Phoenix from the ashes and now named in honour of the late manager of The Beatles.

A forthcoming play, Epstein, at the Epstein Theatre produced and directed by my good friend Jen Heyes

Ensemble 10.10 have used this venue once already this year and this time were playing on Halloween, the 31st October at 7.30pm. The programme, chosen by the group’s conductor and artistic director, Clark Rundell, was suitably macabre for the occasion. Amongst the works on offer were Michael Daugherty’s ‘Dead Elvis’ and H.K. Gruber’s Frankenstein.

Ensemble 10.10 in The Epstein Theatre

Michael Daugherty has scored the work for solo bassoon (dressed as Elvis in Vegas) and ensemble. The players are scored almost exactly the same as Stravinsky’s ‘The Soldier’s tale.’ perhaps I’m being a little over fussy when I state that the only difference being a bass trombone in this one, as opposed to a tenor trombone in Stravinsky’s piece.

Alan Pendlebury getting into method for his role as Dead Elvis

The piece features RLPO Principal Bassoon, Alan Elvis Pendlebury and here is a video of some of the work by the Contemporary Directions Ensemble…

Lay gennulmen, may I present The King. Elvis Pendlebury! He’s a welder by day!

In a similar vein to The Soldier’s Tale, Daugherty seems to be questioning whether Elvis also sold his soul to the devil in order to gain fame and fortune.

H.K. Gruber’s Frankenstein is a particular favourite of mine. Subtitled ‘A Pan – demonium for Chansonnier and large ensemble, the piece is an absolute riot of fun. The lyrics (Childrens rhymes by Grubers friend, HC Artmann) are hilarious too: “Dear mama and dear papa, baby vampire’s biting me.” Superman has lost his pants, rats turn into angels and the mad Doctor dances a drunken waltz. Goldfinger & James Bond also make an appearance.

HK Gruber’s Frankenstein – what a hoot!

Aside from playing the trumpet, my own part includes music for a saxophone shaped Kazoo, a swanee whistle and to spin a hosepipe around my head to make a swirling sound. The ensemble also has to stand, turn to the audience a sing in harmony, “… Give him a big clout, on his small snout. Baby’s cross will knock him out!” The RLPO actually premiered the work some years back, with Simon Rattle. 1978, as I remember. 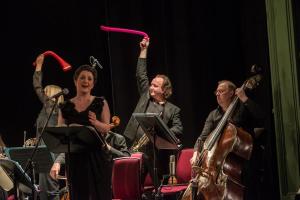 Also included in the programme were the timeless classic ‘Octandre’ by Varese and a world premiere by exciting new lady Italian composer Annachiara Gedda ‘Perspectives’ and another world premiere  by North West of England composer, Ivor Hodgson. This new work, ‘A Little Light Music’ turns a kindly eye on the classics and was very well received by players and audience alike. By day, as they say, Iver doubles up as a bass player with our local Manchester based BBC Philharmonic Orchestra.

Due to events intervening, I am writing this blog, from here on after the gig, so excuse the quick gear change on tenses etc.  The remaining work on the programme was by Elliott Carter, the Doyen of American music, who sadly died a couple of days after the concert;. I sincerely hope this turn of events had nothing to do with my playing of the rather fearsome trumpet solo he wrote in the ASKO concerto for ensemble. Carter was 103 years old when he died the other day, and I was only joking about my trumpet playing… Oh, well! Please yourselves…

Here is the ASKO playing the ASKO Concerto… 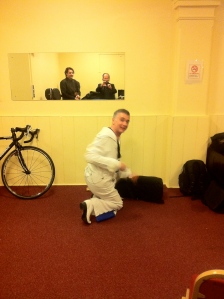 Elvis is leaving the building… by bicycle?!

The pre concert treat was over the road, in the nearby Starbucks. The brass section of Simon Cowen, Simon Chapple, Naomi Atherton and myself enjoyed a pumpkin spice latte and pumpkin spiced slice of cake, to fit in perfectly with the Halloween theme.. Champion!

Thank you very much…