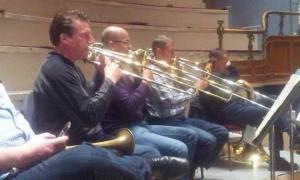 Following the successful Brahms Requiem with the Huddersfield Choral Society, the RLPO programme on offer this week was Sibelius’ lovely Karelia Suite, Mahler’s titanic first symphony and a visit by Norwegian trumpet sensation, Tine Thing Helseth. This young lady was to take on the solo part of the mighty Arutunian Trumpet concerto.

An exciting week by anyone’s standards, to be fair. The BBC certainly thought so and sent up their mobile Radio 3 recording studio to broadcast the performance live on Wednesday evening. The programme was rehearsed on Monday and Tuesday, with performances on Wednesday and Thursday at Liverpool Philharmonic Hall and Friday evening at Preston Guild Hall.

The BBC sound engineer had mistaken Chris Morley (bumper) for the 1st horn and gave him his own ‘solo’ microphone. Fortuitously, he realised his error of his ways – there may have been nothing left of it by the end!

I’ve always enjoyed the Karelia Suite. Sibelius had a real knack of writing these short tuneful pieces and this suite is both joyous in outlook and shamelessly nationalistic. The brass writing is fun, although more scary for the French Horn Section, especially the Principal. It is said that Sibelius developed this skill for shorter concert items to help boost his chaotic finances and to keep him in Scotch whiskey, in between writing those big symphonies. Nonetheless, these works lifted the spirits of his fellow country men considerably under the Russian oppression. Indeed the Russians even banned Sibelius’ later tone poem Finlandia, for just this reason. 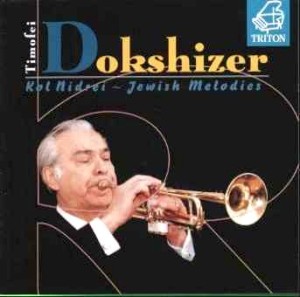 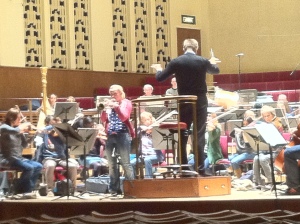 The Arutunian Trumpet Concerto is a flamboyant work with big sweeping tunes, lots of melodrama, dazzling technical passages – in fact, something for everyone. The are hints of Arabic music, klezmer and Russian folk song but the colourful orchestral writing remains very firmly in the western tradition, essentially. I played the piece for my audition to enter Chethams School of Music all those years ago, and Arutunian’s daughter, by then a Mrs Hughes teaching piano at the school, was listening outside the door. I later played the work with the school orchestra, before I left, as did my section leader in the RLPO, Rhys Owens. The last two times the piece was played in concert at Liverpool Philharmonic Hall was Matthew Hardy (a student of mine, with the Merseyside Youth Orchestra) and by Tom Osborne, with the RLPO, when he won our young musician competition. Tom now has my equivalent job with the Halle.

Tine Thing Helseth star has risen dramatically over the last couple of years. The RLPO and Tine have an association with Tine going back during this time as we recorded her album, ‘Storyteller’ for EMI and had Tine as guest soloist last year for our series of seasonal concerts, ‘The Spirit of Christmas.’ Tine has played extensively around the world and leads her own all female brass ensemble tenThing, which also has an album with EMI. 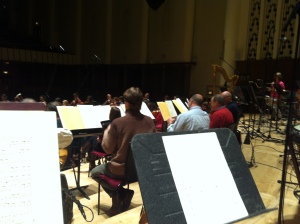 Mahler’s 1st Symphony was composed in 1888 and the original music had an extra movement entitled ‘Blumine’, written with material he wrote as instrumental music for an earlier play, ‘The Trumpeter of Sakkingen. This movement, with it’s extensive trumpet solo has been largely dropped from performances, although might well have been been appropriate for a concert entitled ‘Sound The Trumpet.’

Thank goodness for offstage monitors – it must have been much harder in Mahler’s day! That’s Petrenko on the screen.

Speaking of the trumpet, Mahler one begins with quiet strings and some occasional clarinets, broken by three dramatic off stage trumpet fanfares. These are played by the 2nd, 3rd and 4th onstage players, led by the third trumpet. Once these are over the trumpeters are instructed to rejoin the main orchestra on stage. The 1st trumpet has melodies to play whilst the others make their way back to the stage. This is why the Principal doesn’t play the off stage  stuff. I have written article about the ins and outs of playing offstage parts. Click on the link to find out more… 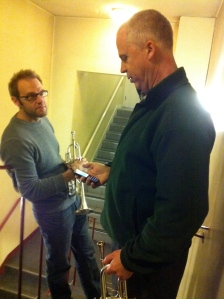 Link to The Offstage Trumpeter

Here are all th”orns, sitting down

Th”orns! Upstanding in their own field!

After all the hard rehearsing earlier in the week, everyone was really looking forward to the performances. I had had a sore tooth since before the recent RLPO trip to Spain, but concert commitments meant I was unable to get it sorted out. Sadly it had got worse and worse until on Wednesday I could barely stand the pain any longer. the concert went really well. All players, the audience and the BBC seemed to be highly delighted with it all. You can still listen to the live performance on the BBCiPlayer…

After the show my tooth was in agony and I hardly slept a wink at all. The next day I had no alternative but to head for the Royal Liverpool Dental Hospital for an emergency appointment with top consultant Mr. Farrelly. Bad news – there was no hope left for my upper left molar and the first available appointment with top consultant surgeon, Ms Balmer would be at 9am the next morning. ‘What about the Mahler, in Preston?’ I said. ‘You will not be able to play for a few days. To do so could result in a more serious operation,’ said Mr Farrelly. Well, I still had to play the show that Thursday evening, even with the tooth issue and my face swelling up. The performance went well nonetheless and the RLPO would have to go to Preston minus myself. Actually this was all arranged on Thursday afternoon and a freelancer was booked from London to replace me whilst I was to spend over two hours under the consultant dental surgeon’s knife and many other ‘horrible’ implements. In fact Ms Balmer did a fantastic job and Mr Farrelly is an expert in making artificial tooth replacements and will be personally fitting my bridge after Xmas…

The Photo of Brendan’s inflamed cheek has been edited out by the arbiters of good taste!

So I didn’t get to Preston, my hometown, and therefore have nothing to write about it at all. The brass section did phone me from Preston to tell me how nice the traditional pre-concert Indian meal was going. Just as I was trying to have my luke warm tomato soup through one side of my mouth at home. Bah!