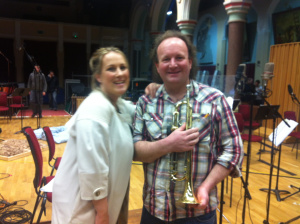 The Royal Liverpool Philharmonic Orchestra have been ‘slotting’ in a recording for Diana Damrau, this week and last. The Christmas schedule is the busiest time of the year, but it has been an absolute pleasure fitting in German opera Diva. She is cutting a disk on the high brow Virgin Classics label, with the RLPO, conducted by David Charles Abell.

The album, to be released next year, is displaying the lighter side of this sensational soprano. Ms Damrau, better known for appearing in the world’s great opera houses as The Queen of the Night; has been recording popular songs from films and musicals, such as Snow White, The Wizard of Oz, The Snowman and Mary Poppins. Hardcore opera fans will not be disappointed, however, as Ms Damrau will be including some classics from the  world of operetta. She is pictured above after a fabulous reading of the Czardas from Die Fledermaus, by Johann Strauss 2nd. 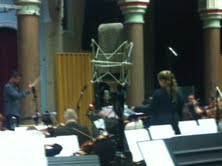 Produced by Andrew Cornall, this will be one album to look out for next year.

Incidentally, it has been really nice to work with David Charles Abell. At the post recording reception, David and I were reminiscing about the ‘old days’, working in the West End Theatres etc. He is a very clever chap, and has studied with Nadia Boulanger and Leonard Bernstein. Apart from David’s world wide fame in musical theatre, as musical director for shows for Cameron mackintosh, Andrew Lloyd Webber, et al, he is noted for his painstaking research in restoring the ‘scores’ of classic musicals. David has also conducted most of the UK’s leading symphony orchestras. 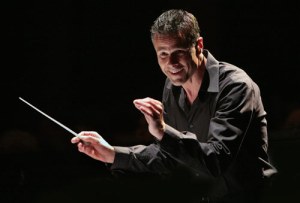