Posted on January 2, 2013 by brendanball

About six months ago I finally got round to commencing study on Theo Charlier’s 36 transcendental studies. They are published by Alphonse Leduc and have been around for ages. My copy is edited by the great French trumpeter, Roger Delmotte. I remember listening to a vinyl LP of Roger Delmotte playing the Leopold Mozart Trumpet Concerto, in the music library at Chethams School of Music, when I was about 15. Other trumpeters had been talking about these as far back as I can remember, and although I had acquired a copy years ago, when Nick Bomford gave up trumpet playing to go into management, I just simply never got around to even opening the first page!

I thought I would gallop through these studies: one a day; then maybe two a week; maybe one a week: two a month etc… I was always in a hurry at College, all those years ago! As time has elapsed, I have not moved off the first two. I can’t perfect them to my satisfaction, so I haven’t moved on. However, I reckon I practice them in a lot more detail than most! Maybe soon I will allow myself to progress to no. 3! Before anyone gets the wrong idea, Charlier Etudes are not the only thing I play… 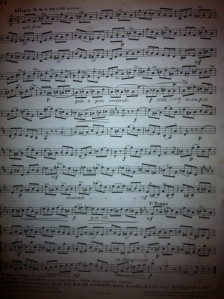 As already published on here, I am an advocate of a fairly swift warm up. I do warm-up but try to get to the music as soon as I can. I try to do this before anything else. I’m not tied to this routine. If I’m late for work, and don’t have time, I just play. Of course, in this instance I would have no choice anyway!

I don’t warm up for the sake of it, or to cover a measured volume of a book, or to limber up by the clock. I have tried all these, but have found they don’t work. I work to get vibration going, to make the best sound I can, as quickly as I can, and to ‘establish the normals’ as they say.

I am not a player to practice an hour doing lip slurs and pedals, resulting in a rough sound, tight chops, bruising and an uncomfortable feel. I have practiced all these for years, in the past. I have taken a long time to come to the realisation, that this is merely practicing for the sake of it and is not the reason I took up playing a musical instrument. I do like to play trumpet a lot though. Once I have everything up and running I go to the music. This has all the stamina, range, flexibilty and technique necessary for anything I encounter. Take it from me, I know: ‘play to sound good, don’t practice to get tired!’ (I was told that by a very wise man)

Another shot of the RLPO/John Wilson New Year’s Eve Jazz concert – even the choir stalls are sold! Photo by Dave Wilson

These Charlier etudes have everything a player needs to develop and hone his standards. They are also nice music, apart from being challenging. Apart from the odd run through of number 3, I just haven’t ‘perfected’ the first two to the standard I want to achieve. If you remember the advice of the great teacher, Arnold Jacobs, on this blog. ‘ It’s not what you sound like, it’s what you WANT to sound like. In my view, a student of the trumpet can’t and won’t improve if he/she only expects to sound the same. The students, and I include myself amongst that number, have to expect to sound better! 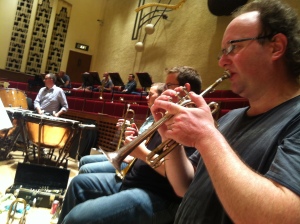 Just miming through something. I don’t sit and play like that normally. Honestly!

For study no. 2, for instance, I am always trying to think beauty of tone, not pushing the air too much; just let the air flow. I realised that I was thinning out the air when preparing to make an octave leap, so I concentrate on the note before the high one being full and beautiful, right up to the change. The same applies before I slur to a low note, too. I am always trying to connect every note, and use a nice thick quantity of air; even though I may be playing quietly. I never hurry and I constantly break the study into ever smaller segments, working out every detail and movement, until everything just flows. Many students may not be so patient, but it doesn’t bother me. I figure that I have months, if it takes that long, so I try to achieve something more each day.

As you can see, I’ve tried a lot a mouthpieces in the past. I have not found that they have helped over much with any issues. I never changed again once Toshiaki Kameyama custom made my unique mouthpiece for me.

Study no.1, for articulation, is a very different kettle of fish. It was pointed out to me, that in my panic to play the study at the metronome marking, or faster, I was cutting the air stream a lot, especially as I changed registers, or negotiated wider intervals. Since the  instruction at the beginning is ‘without force’ I slow this one down a lot, most of the time. Rather than a lot of exaggerated stopping and starting, I like to see how ‘fat, beautiful and cantabile’ I can make it. I sometimes even practice out the articulations and the rhythm on a first space F only; say, maybe a couple of lines at a time. I will play it as written at half or even a quarter of the tempo, to detect whether I am clipping the air stream. Through patient study, such as this I find I stiffen up less and am much more satisfied with the end result.

A mantra I am fond of reciting to myself when I study both pieces, and others, was related to me by the great pedagogue, Kristian Steenstrup, “… When you have a difficult high note, make the one before the long and beautiful one.” 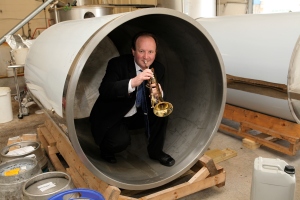 This works for me – best of luck!