I have often wondered what it must be like to be the best at something. In the world, I mean. Today marks the passing of one who could have answered that question. This is a very sad day as we hear of the death of the great trumpeter Derek Watkins. Derek finally lost his two year battle with the very rare cancer, Sarcoma. My heartfelt condolences go out to Derek’s widow, Wendy and his family at this time of sorrow.

Dizzy Gillespie – “… When you speak of lead trumpets, Derek Watkins is ‘Mr Lead’. “ 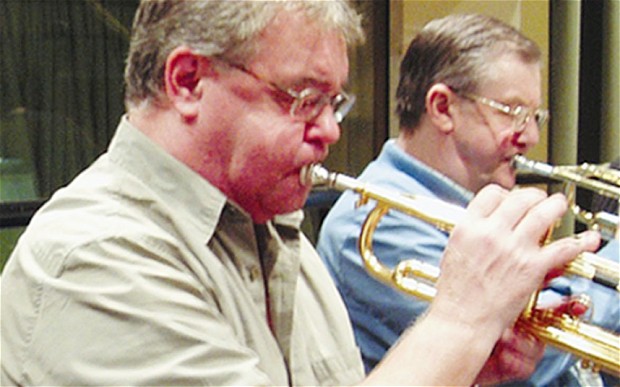 Back in 1989, I went to Ronnie Scott’s, London’s iconic jazz venue, in Soho. My companions for the evening were Julian ‘Tog’ Brewer, now Principal Trumpet with English National Opera and Martin Lewington, the well known London freelancer. On top billing that night was the Jack Sharpe Big Band. The trumpet line up may well have been the best in the world at that time. Steve Sidwell, Guy Barker, John Barclay and Derek Watkins on lead. Derek’s solo spot that night was the Carpenters’ hit We’ve Only Just Begun. He was awesome all night long. I have never heard such an amazing display of power and virtuosity in my life, before or since. I was just speechless when I left. I am so lucky to have heard him live on several occasions. You don’t ever forget playing like that. Derek, you were the best!

One of the most recorded trumpet players in the world, you have heard Derek playing the trumpet, even if you don’t realise. All you had to do with Derek was put a trumpet in his hands and he could play anything! I hope the samples of Derek’s genius on this page will give you as much pleasure as they do to me. It is so difficult to listen to them today without shedding a tear or two…

“… He was also the greatest trumpet player I ever met in my life, and I have played with them all.”
“Just listen to his heart.”
The kindest words from one great trumpeter to another. 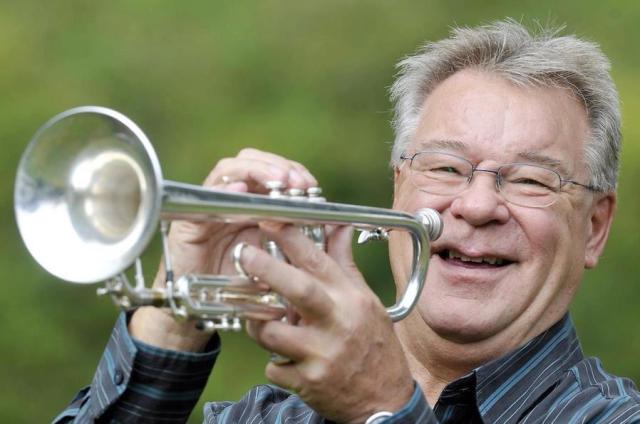 “A trumpet spreading a wondrous sound
Throughout the graves of all lands.
Will drive mankind before the Throne
Death and Nature shall be astonished”

Derek is the only person to have been on every Bond film. That includes directors, actors, technicians, make-up ladies; everyone. Derek played on Dr No when he was just seventeen. Tony Fisher was lead in those early days before Derek took over. Tony is still going strong today and fronts the Burt Kaempfert Band. This story involves my brother, who is a well known percussionist in London. Last year, he was travelling from London to Manchester to take part in some recording sessions for ‘Coronation Street  – The Musical’ at Granada Studios. He had ‘wangled’ himself a cheap deal in first class and sat at a table looking at some music scores he needed to study. He noticed a shadow over him and looked up to see Derek who said, “… Your in my seat. No one else can sit in my seat. Only I’m allowed to sit in seat 007. If you don’t move I’m going to get my trumpet out and play it at you!” Derek was also travelling up to do the same work and sat with my brother and proceeded to have the whole first class carriage in stitches. he also played his trumpet to everyone and informed them all about his Sarcoma charity. As far as I know, they are both still owed the fees from the sessions, but that’s another story…

Dizzy Gillespie ” when you speak of lead trumpets, Derek Watkins is ‘Mr Lead’ “

“…Derek died surrounded by his wife, their children…and grandchildren after a two year long battle against cancer.

His great love for his family and his legendary trumpet playing as well as his gift of laughter and friendship will mean he will be remembered for generations to come.

Wendy & family would like to thank everyone for their incredible support and outpouring of love for this wonderful man.

He was amazed but very honoured to have received so many messages and also comforted by the knowledge that his trumpet playing and reputation will live on for future generations to enjoy and admire.”

I was in Liverpool’s glorious Anglican Cathedral this week for a gala organ recital by Prof. Dr. Ian Tracey. Ian is Organist Titulaire at the cathedral and has organised a series of concerts and events this year to raise £900,000 for a complete refurbishment of the mammoth organ in there. Afterwards I was chatting to Ian and noticed a very large queue of concertgoers waiting to ‘buy’ the many pipes. I joined the queue, thinking ‘oh, please’ please… don’t but the pipe I want!’ Thinking of Derek, I bought the ‘Super C pipe on the trumpet console of The Great Organ. A#5 is now called Derek Watkins!

Other Posts on this site about Derek Watkins