The new Shostakovich Symphony Number Seven, by Vasily Petrenko and the Royal Liverpool Philharmonic Orchestra, has been out on general release for a week now and so far the reviews have been amazing. Our version of ‘The Leningrad’ has been eagerly anticipated by many and has been the talk of the classical world for some time. 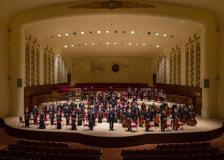 The Royal Liverpool Philharmonic Orchestra – the oldest orchestra in the UK

It is out on the Naxos label and is part of our box set of complete Shostakovich Symphonies on that label. This is what the critics have had to say so far… 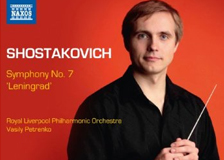 Vasily on the cover of the new RLPO Shostakovich Symphony no. 7

“This Merseyside Shostakovich cycle gets better with each issue; indeed, it is rapidly becoming the defining monument of the young Russian conductor Vasily Petrenko’s tenure with the RLPO… The miracle of this performance is the thoughtfulness and sense of inner repose that Petrenko hears in the quieter music, often so hushed — the beginning of the side-drum rattle introducing the “invasion” music — that you have to strain to hear it. In this extraordinary opening movement, it is the winds, from shrill piccolo to plangent bassoon, that stand out, but the depth and rawness of unison string sound that Petrenko encourages in the searing adagio expose Shostakovich’s battered nerve ends to devastating effect. The young maestro wields magisterial control over the overarching shape of this once despised, now rehabilitated and thrillingly dramatic symphony, with sensational results. Petrenko presides over a golden age of music-making in Liverpool.”
The Sunday Times (requires log-in)

“The ear is struck immediately by [Petrenko’s] refusal to overplay textural excesses. The atmosphere is quieter, less ominous than we’re used to. Flutes and clarinets are reduced to a whisper and strings to a hushed susurrus. When the climaxes explode, they do so with total shock and desperation. Between extremes, the conductor maintains an even emotional keel, avoiding the risk of melodrama that Bartók so wickedly caricatured in his Concerto for Orchestra. Petrenko puts his mind to saving the symphony from itself. Playing in another port-city at the western edge of a civilisation, the Royal Liverpool Philharmonic Orchestra delivers delicacy, empathy and, when required, astonishing power. The recorded sound is a shade below pristine (my only reservation) but the performance is treasurable, a terrific affirmation of a towering masterpiece.”
Norman Lebrecht, Sinfini Music

“The latest instalment in the Shostakovich symphony cycle by Vasily Petrenko and the Royal Liverpool Philharmonic Orchestra lives up to and beyond every expectation. It is, in every sense, a great performance and recording… In a nutshell, Petrenko has re-thought the symphony from the ground up; and there is not a second-hand thought in his concept and realisation. The precise word for this flawless and seamlessly sustained interpretation is “epic”: in its tempos (unhurried) and particularly in its depth and extremely long-range view. It is both gripping and shattering, mellifluous and volcanic, unfolding like a landscape of the soul.”
Herald Scotland

“The unyielding martial insistence of the first movement and especially the pathos of the huge Adagio speak of oppression, tyranny and loss of life. The RLPO and their Leningrad-born conductor Vasily Petrenko bring out the work’s lyricism, as well as its austerity, with formidable woodwind playing throughout. These forces won a Gramophone award for their recording of the Tenth in 2011. They could be in line for another.”
The Guardian

“Petrenko led them through the rising maelstrom of the persuasive “invasion” theme with crisp control, in the process generating a sound so powerful it felt as if it could crush the breath from its listeners.

But there was also room for softness and reflection, too, often through a series of well-executed solos in the middle movements – albeit alternating with nightmarish cacophonies.

It all ended in a blazing, triumphant roar with a wall of brass rising to sound the victory – closely followed by the audience rising to echo the cheer.”
Liverpool Echo

CLICK HERE TO READ ABOUT OUR 2011 GRAMOPHONE WINNING SHOSTAKOVICH 10