Many of my colleagues, and indeed trumpeters the world over, swear by the practice routines of James Stamp. I hear lots of players warming up to these exercises and repeating them all through the day.

Personally, I don’t like to get tied to any particular list of exercises, the reasons have been stated many times in other posts on this blog. I bought the Editions BIM Stamp book when I was at school at fifteen years old. I tried it for a while but didn’t stick with it. I revisited it at college for a few months and several times over the years for extended periods. I also bought Roy Poper’s excellent book explaining the studies more fully.

Some trumpeter colleagues of mine went over to Loa Angeles to study with the widely respected pedagog Boyde Hood, himself a student of Stamp. Boyde’s routine is said to be written with Stamp at the end of James Stamp’s life and are considered by many to be Stamp’s definitive routine. I copied the routine for myself, including the extensive mouthpiece routines. I haven’t included the mouthpiece studies here, but would willingly post them if requested.

The full Stamp routine, pictured in full at the end of this post, simply took me too long and  even after a year or two my chops were quite stiff, sore and my mouthpiece never felt good on my chops etc. Things really improved when I gave up the routine altogether. I also began to be ‘addicted’ to the routine and would struggle to play unless I had laboriously gone through all the pages!

For me, the full routine has too many pedal tones, covers too much range unnecessarily in each exercise, and the studies aren’t especially musical. So I stopped! From time to time I do a much shortened version just to get my chops going – I do this as a change so that I don’t do the same exercises every day and get stuck in a rut. I only go down to low F sharp and as high as top C. no pedal tones! Then I get straight to the music; maybe a solo piece, then I work on what I have to learn for work. I am fully aware of the many top players whop do the full routine every day. It just doesn’t work for me. Here is my short version followed by Boyde Hood’s full routine… 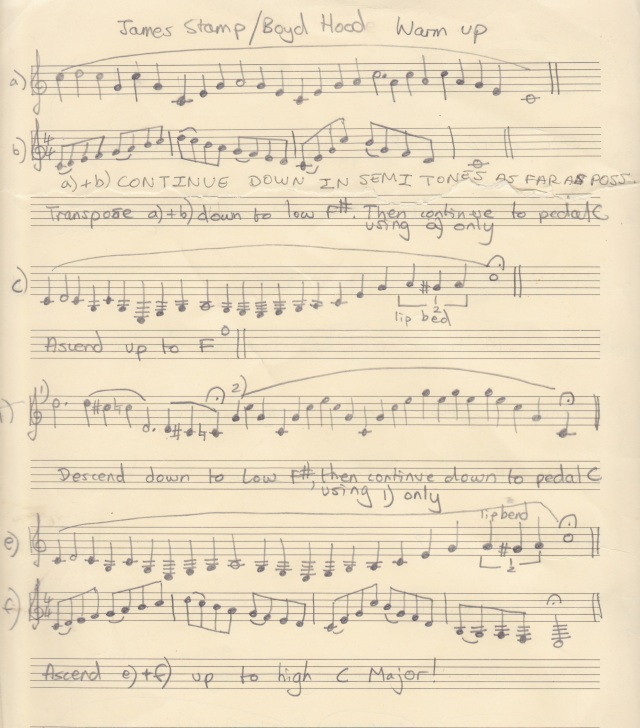