Bringing The House Down! – RLPO

That’s me having a last look after the concert!

Yesterday evening saw the long awaited closure of our beloved Liverpool Philharmonic Hall for much needed major refurbishment. The builders move in today and the demolition work etc. will now begin in earnest.

The concert programme could not have been more spectacular. The proceedings opened with ‘Welcome Ode’, written by Benjamin Britten to welcome The Queen in 1977 and featured our wonderful Youth Choir.

The Philharmonic Youth Choir and RLPO in Britten’s ‘Welcome Ode’

‘In The South (Alassio)’ by Elgar is always a favourite of RLPO audiences. This trusty work was followed by a real curiosity. The ex-drummer with the rock bands ‘The Police’ and ‘Curved Air’, Stewart Copeland is a successful film and concert composer nowadays and tonight the RLPO were giving the world premiere of his concerto, Poltroons In Paradise’.

This new work was specially commissioned to showcase the special talents of our highly regarded percussion section. The soloists were our own Graham Johns and Henry Baldwin, Adrian Spillett from the CBSO (RLPO percussionist Jo Frieze is on maternity leave) and RLPO Timpanist Neil Hitt. The piece had a certain amount of humour written into to it and was a bundle of rhythmic energy. 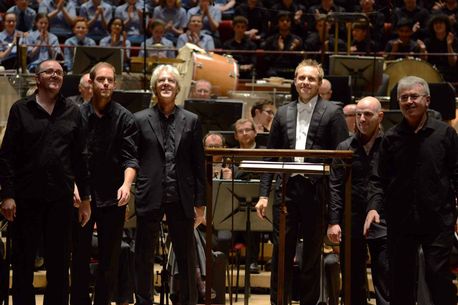 The reaction of both the audience and Stewart Copeland at the end meant the piece had been well received, to say the least. There will be another chance to hear Poltroons In Paradise tomorrow in Perth, Scotland, wheere the piece will also be recorded by the BBC for a live broadcast. The RLPO will also be taking the percussion concerto on our forthcoming tour of China in the Autumn.

Incidentally, Stewart Copeland, who is one of the nicest people anyone could wish to meet, told me that his father was a trumpeter and Stewart has kept his equipment. I’ll look forward to discussing this in more detail with him. 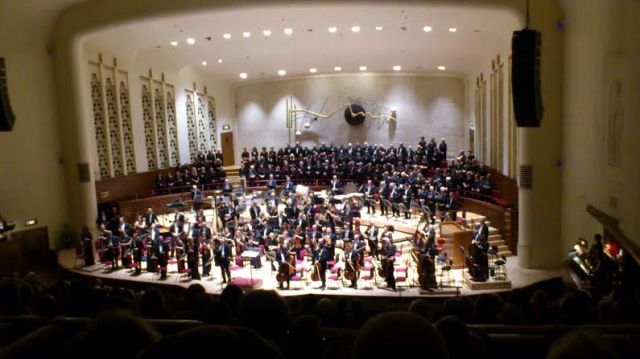 The RLPO & RLPC receive their applause at the end of ‘Belshazzer’s Feast’. Vasily Petrenko addresses the audience at the finish.

The giant Philharmonic Hall cake for the post concert party

Afterwards, both musicians and audience were invited to the grand foyer bars to celebrate what would be the last time we would experience the hall in it’s present form. The giant Philharmonic Hall cake, above, was the centre piece of the proceedings.

Afterwards, I noticed my poster was still on show outside. I wondered if it will still be there when the hall re-opens, or not. It will definitely need a clean as the bar above it has become the perch for a rather large seagull! Let’s hope the detailed plans for the concert room etc will leave Liverpool Philharmonic Hall with it’s integrity intact upon re-opening in November and will be recognisable as the place we all know and love…