It was yet more glorious weather on the day of our second and final appearance in Bucharest for the 2015 visit to Romania. The RLPO were free until 2.30pm so yet another day of exploring was in store for many.

The churches really are spectacular and worth a visit, even for the non-religious such as myself. They are true works of art and are so numerous. A lot of Romanians appear to be very devout and I saw many lying prostrate, praying on the church floors.

The pastry shops and bakeries are worthy of note too. The Romanians appear to go to great lengths to present everything as perfectly and spectacularly as possible. The tourism industry is booming here, which is no surprise.

Look at these beautiful monastery gardens…

There appears to be culture everywhere you look in Bucharest. As I said in my previous post, they really like classical music here.

As we wandered around the pretty streets to our lunch destination. We noticed a very expensive looking violin shop with a violin in the shop window that had been much improved by the addition of trumpet parts! That’s better… It must sound great now… 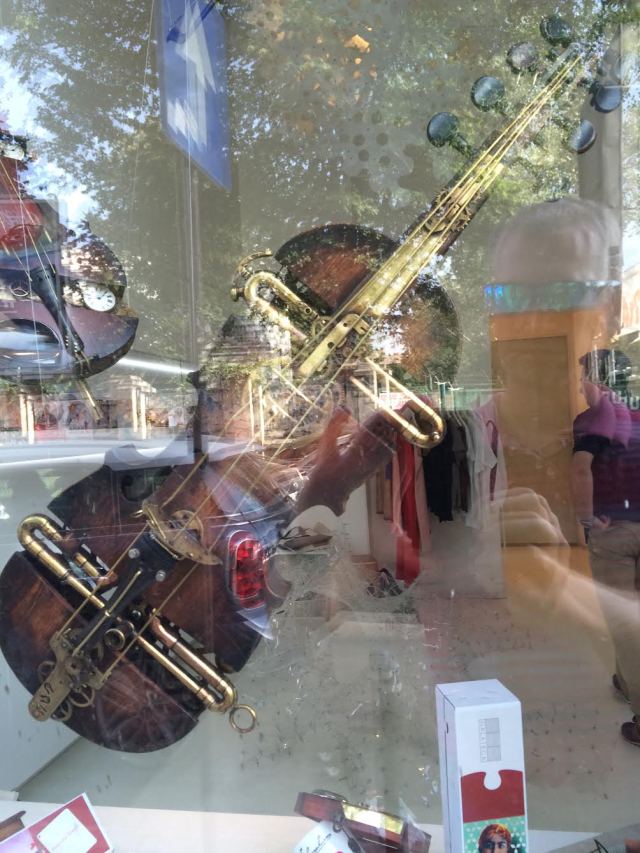 The restaurant we were looking for was Lamama, a place described as in traditional Roman style. On our last visit to Bucharest, we had eaten at Lamama as it was just around the corner from our previous hotel, the 5 star Radisson Blue.  On such a hot day it would be nice to sit outside under the canopies and pass the time before the rehearsal with more good food.

There also appeared to be many theatres dotted around town. This ODEON appeared a very grand design… I’m not sure it is a cinema though. This one has more to do with the literal meaning as a place dedicated to the performing arts.

In my view, The Romanian Athanaeum is the most beautiful concert house in Bucharest.

Paul Marsden (Second Trumpet) and I stuck our heads in as we indulged in a spot of sight seeing. This hall was also hosting an important section of the Enescu Festival.

Even the pubs are getting in on the orchestral act. This one, on Georges Enescu Street, was the Bucharest equivalent of an Irish bar had a facade of orchestra musicians above the bar. They aren’t real people by the way!

There are almost too many sights to talk about! 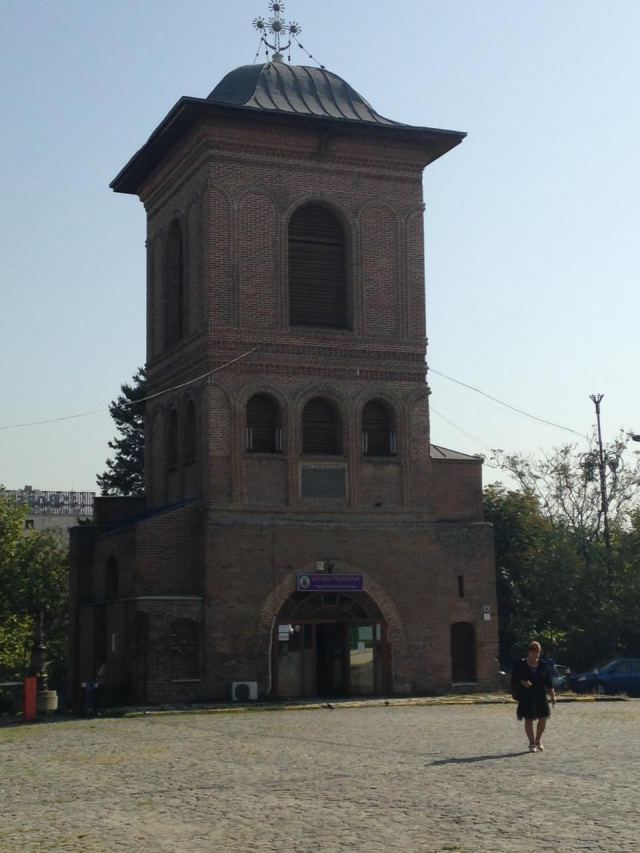 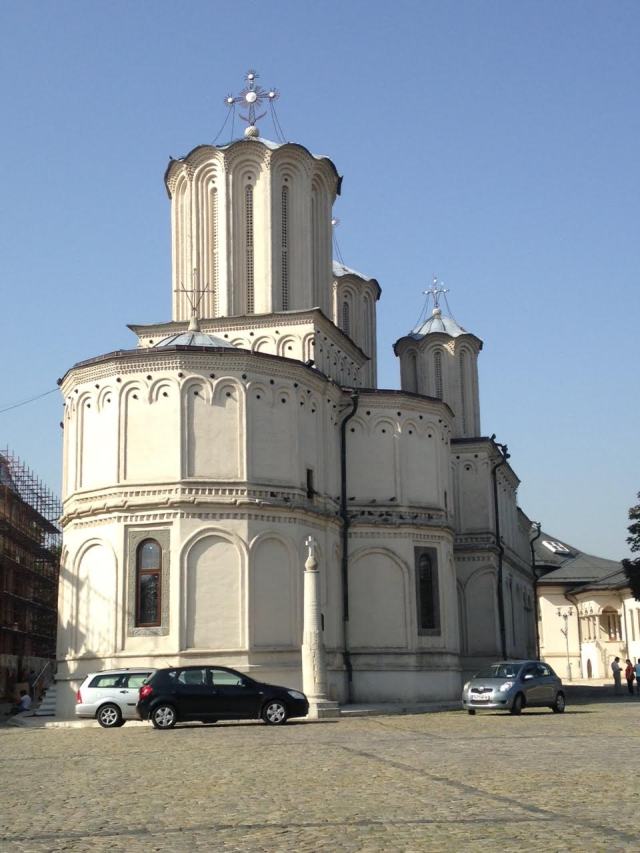 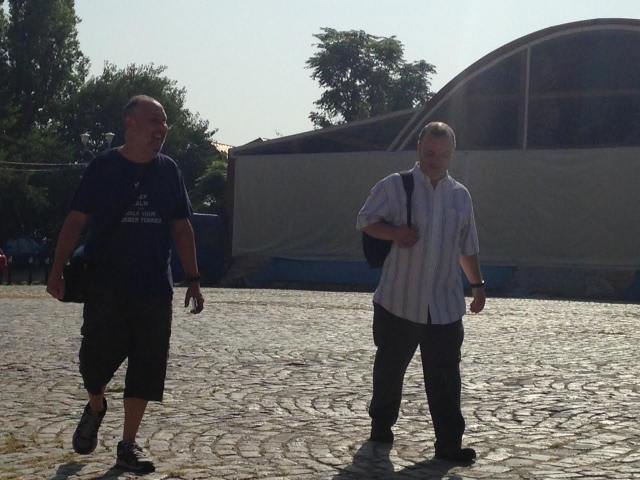 Chris Morley and Simon Griffiths, RLPO Horns, always get in as much tourism and culture as possible on these trips.

The largest civilian building, and the heaviest building is in Bucharest. The communist dictator, Nicolae Ceuacescu appears to have built this colossus in a mad fit of meglomania. Not only to house the government but as his own personal house, too.

The Palace Of The People – Ceaucescu’s House!

Even today, many of the 1,100 rooms remain empty. It is certainly worth a visit and takes more than one hour just to walk round the outside!

Time soon passes in such an interesting place and we convened for the rehearsal.

This cartoon has nothing to do with our tour, except I saw it on social media during our stay in Bucharest.

The sunsets here are as beautiful in Bucharest as the old city is in the daytime. Some of us were not in the first half of the concert on this occasion so it was getting dark as we arrived at around 8.30pm.

These photographs are once again supplied by Roza Zah, the official photographer of the Enescu Festival. Unlike the performance yesterday evening, these are not in the concert hall itself but over the road on the huge square were the concert was relayed live to various audiences basking in the warmth of the outside evening air.

The performances were also broadcast on Romanian tv, French tv and live on radio. The above picture is once again of Romanian organist Simona Sandalescu who was performing with the RLPO on this tour, but lives in Bucharest. 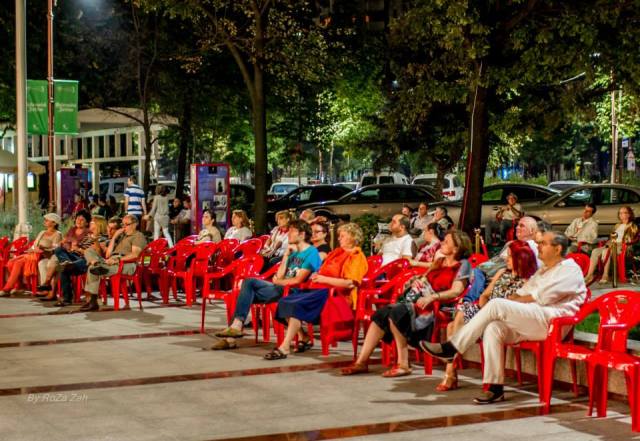 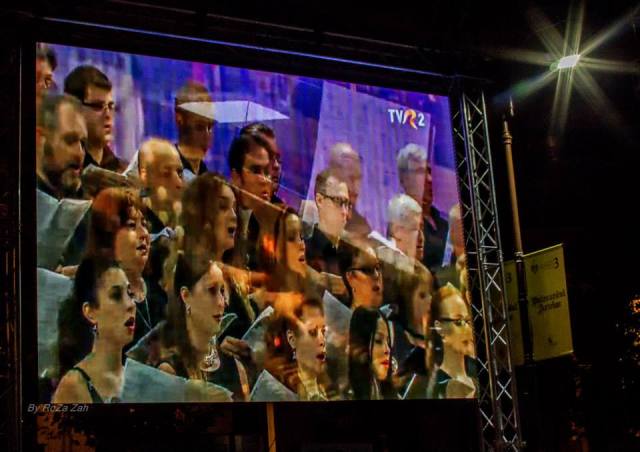 We didn’t take our own Royal Liverpool Philharmonic Choir but performed the epic Enescu Symphony no. 3 with the Choir of the George Enescu Philharmonic. 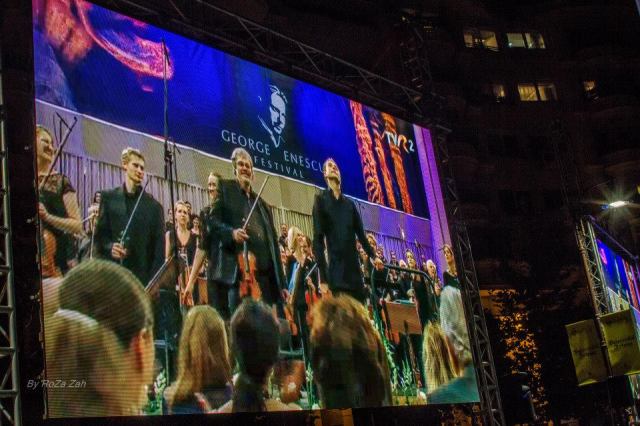 Yet another complete sellout crowd giving us a standing ovation.

The RLPO performing the epic Symphony no.3 by Enescu

So, that’s the way it was! Tune in next time the RLPO embarks on more travel across the globe.

So it’s goodbye from the Tour of Romania 2016 trumpet section. From Right to Left, Neil Fulton, Andrew Dallimore, Rhys Owens, Paul Marsden, Craig Kilgour and from myself Brendan Ball.

Read All About Day One Here

Read All About Day Two Here

…and I didn’t see Carpathian Bear on any menu this time round!

CLICK HERE FOR LINKS TO THE PREVIOUS RLPO VISIT TO BUCHAREST